Despite his pro wrestling career and my coverage of wrestling, I have yet to see him in action. I have met him several times at various comic cons and wrestling events.
I knew of his affinity for Roddy Piper and the Ramones, his interest in comic cons, his IPW Chicagoland Wrestling championship, his partnership with Roxi Heart and other assorted tidbits, but I didn't have a lot of details until I interviewed him. I learned a lot about Joey in our interview at On the Beat With Joey Roth.
One of the best times I had at Wizard World was meeting Joey and us interacting with a couple wrestling legends. We met Lisa Marie Varon and The Honky Tonk Man. Everyone loves LMV, especially in Chicago, but Joey was a bit more excited to meet HTM.
It's completely understandable. HTM was a great character in the WWF back in the day. He was the longest holder of the Intercontinental title. Joey is the longest holder of the ICP Chicagoland title.While not quite as prestigious as the IC title, Joey's reign has become legendary.
It was cool seeing them interact. I think HTM originally thought Joey was a cosplayer, a regular sight at comic cons. He soon learned that Joey and the title are legit.
As wrestling shows start happening again, I plan on finally seeing Joey i action. I am quite sure I will not be disappointed, but knowing Joey, I will also probably be surprised. Much like Piper, when you know the answers, Joey changes the questions. I am looking forward to this.
Check out Joey Roth on Facebook for more info and fun. Also, go to WizardWorld.com for all info and scheduling for all of their events. 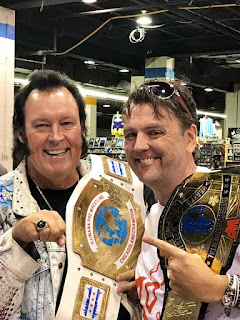