Cards That Never Were is a recurring series in which I create virtual trading cards for players missed in various sets. It is a concept I have borrowed from far too many to list, but I appreciate all of their efforts. Other creations of mine and many others can be found in the Custom Baseball Cards Facebook group (which is not just baseball cards, despite the name).
I previously made some Cards That Never Were for former QB Bob Lee at Bear Down Sunday/ Cards That Never Were: Bob Lee.
To recap, Lee had football cards in the Topps sets of 1972, 1974 and 1975.  As usual, I set out to fill in some of the gaps. I could not find any pictures of Lee from the 1969 season.  Wanting to be accurate, I could not use a newer picture for this card.  Therefore, I could not create one for the 1970 series. I also was missing enough pics of Lee with the Vikings or any pics of him with the Rams to complete his cards.
Recently, I found another picture I could use to give Lee a 1979 Topps card. It's always nice to fill another gap. Now, 1969, '80 and '81 remain white whales. 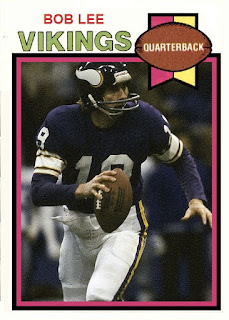