Cards That Never Were is a recurring series in which I create virtual trading cards for players missed in various sets. It is a concept I have borrowed from far too many to list, but I appreciate all of their efforts. Other creations of mine and many others can be found in the Custom Baseball Cards Facebook group (which is not just baseball cards, despite the name).
Jim O'Brien played his college ball at Cincinnati, before being selected by the Baltimore Colts in the 3rd round of the 1970 NFL draft. O'Brien kicked the winning field goal in Super Bowl V in January 1971. Because of that kick, NFL Films named him the #9 "One-Hit Wonder" of all time. O'Brien played three seasons for the Colts, before finishing his career with the Detroit Lions in 1973. All told, he hit 60 of 108 field goals (55.6%) in his career. He also caught 14 passes for 305 yards and two touchdowns.
For his efforts, Topps gave O'Brien cards in sets from 1972-'74. I filled in the gap with his rookie card, which features his big moment. 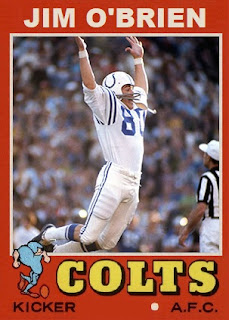 1. He was just coming off his Super Bowl heroics.

2. Even though card sets before 1973 only had 8 to 10 players per team, they almost always included each team's QB and kicker.

Exactly. Some choices were odd.