This is a regular series in which I create virtual trading cards for celebrities wearing jerseys. Today, we continue marching alphabetically through all MLB teams.
Born in California, Kelsey Plum starred in basketball at the University of Washington before being selected by the San Antonio Stars (now the Las Vegas Aces) with the first pick in the 2017 WNBA draft. It was the first time the first pick in both the WNBA and NBA came from the same school. Plum missed the 2020 season with an injured left Achilles tendon. She returned to her school state to toss a first pitch for the Mariners and find herself on a Celebrity Jersey Card. 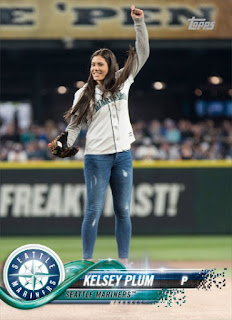 Breanna Stewart was born in New York and starred at UConn before being selected by the Seattle Storm with the first pick in the 2016 WNBA draft. Stewart, one of the best and most popular players, was a key part of the Storm's 2020 WNBA championship season. Stewart tossed a first pitch for the Mariners this season to get her Celebrity Jersey Card. 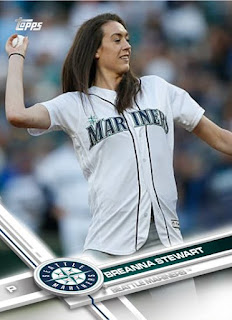