Cards That Never Were is a recurring series in which I create virtual trading cards for players missed in various sets. It is a concept I have borrowed from far too many to list, but I appreciate all of their efforts. More of my creations and many great creations of others can be found in the Custom Baseball Cards Facebook group (and not just baseball cards).
After starring at Notre Dame, QB Daryle Lamonica was selected by the Green Bay in the 12th round of the 1963 NFL Draft and the Buffalo Bills in the 24th round of the 1963 AFL Draft. He signed with Buffalo and spent four seasons with the Bills before joining the Oakland Raiders. He played eight seasons with the Raiders and retired after the '74 season. All told in his career, Lamonica threw for 19,154 yards, completing 49.5% of his passes with 164 TDs and 138 INTs.
For his efforts, Lamonica received cards from Philadelphia or Topps from 1964 through 1972. That left '73 through '75. I was able to find enough good pictures to fill in the missing cards. 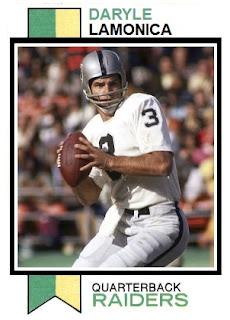 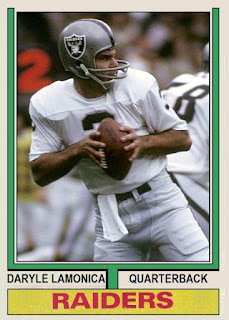 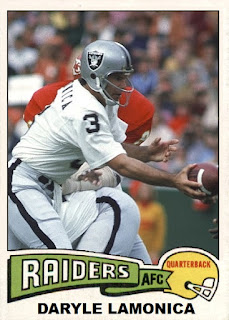