This is a regular series in which I create virtual trading cards for celebrities wearing jerseys.
A native of Jackson, Mississippi, LeAnn Rimes has been performing since her pre-teen years. She has won many awards, including two Grammy Awards. She has sold more than 37 million records worldwide. Rimes wore an Atlanta Falcons #7 jersey when she performed the National Anthem at a game and earned a Celebrity Jersey Card. 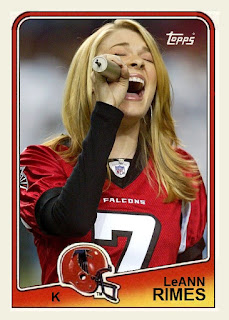 Also born in Mississippi, Britney Jean Spears has had an interesting career. She has sold more than 100 million records worldwide, while also remaining in the news for various reasons. Despite some personal issues, her success and talent cannot be denied. Spears wore a #90 Tennessee Titans jersey to earn her Celebrity Jersey Card and she gets extra points for wearing it while not performing. The #90 was worn most notably by former Defensive End Jevon Kearse. Who wouldn't mind being tackled by Spears? 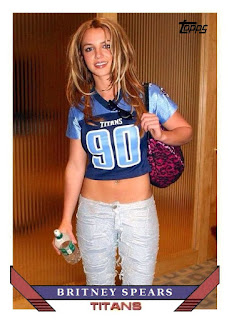