Celebrity Jersey Cards is a weekly series in which I create virtual trading cards fo celebrities wearing sports jerseys. Before moving from our football theme, today I celebrate the Super Bowl teams.

Natalya Neidhart was born into the legendary Hart wrestling family in Calgary, Alberta, Canada. The daughter of Jim "The Anvil" Neidhart and Bret's sister Ellie, Nattie is carving her own legacy in the WWE. Already a multi-time champ, Nattie might be too good for her own good. She is often used to make others look better. Residing in Tampa now, Nattie is a big fan of the Buccaneers. Nattie flexed her muscles on the field top earn her Celebrity Jersey Card. The champ loves the champs! 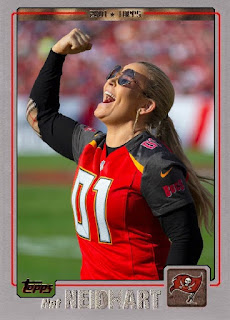 Richard Christy grew up in Kansas, becoming one of the world's greatest drummers. He won a contest to earn a job on The Howard Stern Show and has been creating silliness ever since. He doesn't stray from his Kansas roots though. The Chiefs are still his "favorite" team. Christy is wearing Travis Kelce's #87, because he's his favorite. I bent the rule of only one Celebrity Jersey Card per celebrity/team. 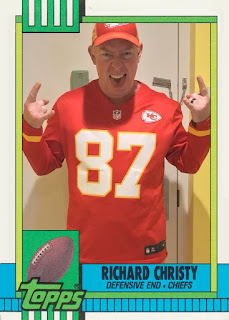