Celebrity Jersey Cards is a weekly series in which I create virtual cards for celebrities wearing jerseys. A little over a year since Kobe Bryant tragically died, I feature two celebrities keeping his memory alive by wearing his jersey.

In any discussion of the greatest in basketball, Bill Russell must be mentioned. A five-time MVP, 12 time All-Star and 11 time NBA champ in his 13 year career, Russell also won two championships as a coach. Russell is tied with Henri Richard (NHL) for most championships won as a player in North American sports. Although one of the faces of the Boston Celtics franchise, Russell wore a Kobe jersey in tribute to earn his Celebrity Jersey Card. 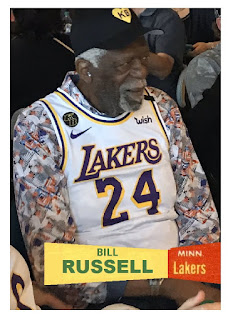 Actress Sophia Bush is probably best known for her roles on One Tree Hill and Chicago P.D. The native of Pasadena, CA is very active with social causes and charities, proving she is not just another pretty face, although she has landed on many lists of the most beautiful women. Bush showed her support of Kobe and her hoe area Lakers by wearing his jersey to get her a Celebrity Jersey Card. 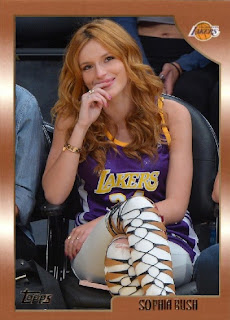