Cards That Never Were is a recurring series in which I create virtual trading cards for players missed in various sets. It is a concept I have borrowed from far too many to list, but I appreciate all of their efforts. More of my creations and many great creations of others can be found in the Custom Baseball Cards Facebook group (and not just baseball cards).

Catcher Mike Martin was selected in the first round of the 1978 MLB draft by the San Diego Padres. He played in the minors for the Padres through the '84 season, after which he signed with the Milwaukee Brewers as a free agent. In early '86, Martin was traded to the Chicago Cubs. In the '86 season, Martin got into eight games, getting one double and two walks in 15 plate appearances. He was released by the Cubs prior to the '87 season.
For his efforts, Martin did not receive any cards, which is totally understandable given he only played in eight games. Still, it did not stop me from creating a virtual card for Martin. I guess this would be his rookie card and his "career capper card," too. 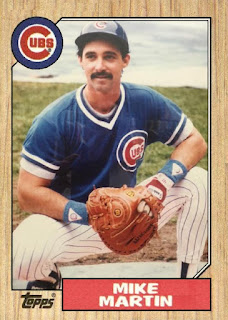