On the Beat With Athletes Unlimited Volleyball Week 4 Part 1

The post game press sessions featured players Jordan Larson, Lauren Gibbemeyer, Tiffany Clark, Bethania DeLaCruz, Karsta Lowe, Molly McCage, Ebony Nwanebu, Aury Cruz and Taylor Sandbothe. They all spoke to the press and answered questions about Week 4 games and the season in general. Of course, they also answered my questions which tend to veer off into general interest topics from their lives. Go to On the Beat with Athletes Unlimited Volleyball Week 4 Part 1 for the press sessions.

This set of pressers was a bit different than the previous weeks. On one hand, the players were very loose and engaged in some fun interplay. You can tell they are more comfortable with each other, the moderators and even the press.

On the flip side, the players realize the season is nearing the end. They have had a tremendous experience and it will be sad for everyone when it ends.

Much like the players from the AU inaugural season, these players are part of something very unique. The league setup is unique and is changing the way everyone looks at the sport. Changing teams, one champion, money allocated to player causes and more make this different from all other leagues.

Additionally, being secluded together for all of these weeks creates bonds that could not be replicated elsewhere. During no other season or series would this many elite players be together so much. I can't imagine how close these players get, but I feel like I have created bonds with the players. It's simply an incredible time.

The players return to action for the final weekend of the season on Saturday. I'll be watching and I encourage all to give this a look. It's a special thing worth checking out.

Go to AUProSports.com for more info on all of Athletes Unlimited leagues. Also, check here, GlobalTravelerUSA.com, GlobalWomensSportsRadio.com and Patch.com for my recurring coverage of AU. 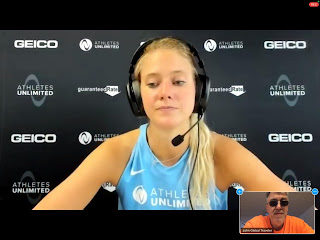