On the Beat With Madison Fisher (DePaul Softball '20)

For the last few years, I have covered the DePaul Women's Softball team. One of the players was the versatile Madison Fisher.

While covering the team, I never had the opportunity to really delve into Fisher's life outside of DePaul, but that changed recently because of her work off the field.

As I do with all the players and teams I cover, I follow Fisher on social media. Earlier this year, I saw a Madison post featuring an illustration she did for former teammate Skylor Hilger. That was followed by another post of her first commissioned piece, an illustration for Jess Cothern, another former teammate. Designs By Fishy, her hobby seemed to be turning into a business of sorts.

My coverage of women's sports and the athletes for Global Women's Sports Radio coverage does not end when the player leaves the team or sport. These women still have stories to tell and Madison's seems just to be starting.

I contacted Madison and she was gracious enough to give me time for an interview. We discussed her softball career, her path to DePaul and more, but most of all her art work.

The catcher-outfielder had an interesting journey to DePaul. After playing softball at Minnetonka High School in Minnetonka, Minnesota, Madison decided on DePaul University, but did not plan on playing softball. She chose DePaul for academic reasons.

Once at DePaul, the lure of the softball field called Madison once again and she tried out for the team. To anyone who knows her, it was not surprise she made the team as a walk-on.

In her first season with the Blue Demons, Madison made her collegiate debut as a pinch runner. In her second season, she played in four games. As a junior, she started one game and scored 13 runs, primarily as a pinch runner. Her senior season was shaping up to be her best, as she had appeared in eight games before the pandemic hit, ending the season.

Madison finished her college academic career and returned to Minnesota, ready to embark on a business career. With a degree in Public Relations and Advertising and a minor in Graphic Design, Madison's future in the business world is bright.

For most people, a successful business career would be enough, but Madison's versatility made her special in softball and will do the same in life. As I said in our interview, I wish her a ton of success in business, but I also look forward to seeing her artistic side develop.

Madison's creativity goes well beyond the average doodler. Her commissions for friends are unique and fantastic. She isn't limited to illustrations though. Madison has designed business logos and cards, too. Each is a piece of art, as well as being a professional image for the business. She also uses various styles, making each piece have its own look and identity. 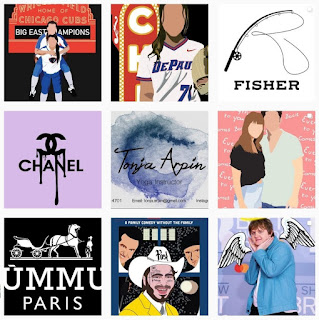 Having seen hundreds of illustrators and artists at conventions over the years, I know a little about that field. Much like a softball coach might speak on a player, I say about Madison,  “This kid has talent.”
The “kid” reference is my joke because I graduated from DePaul way before my fellow alum Madison was even born. The “talent” part is no joke though. Madison has the ability and creativity to hit a home run as an artist-illustrator-designer.
Posted by Johngy at 6:00 AM