After an outstanding career at the University of Houston, Clyde Drexler was selected by the Portland Trail Blazers with the 14th pick in the 1983 NBA draft. "The Glyde" spent 11.5 seasons with the Trail Blazers, before playing 3.5 years with the Houston Rockets to end his Hall of Fame career. He won one NBA championship (when Michael Jordan was temporarily retired, I must add). Drexler earned his Celebrity Jersey Card tossing the first pitch for the Houston Astros. I wonder if he glided it. 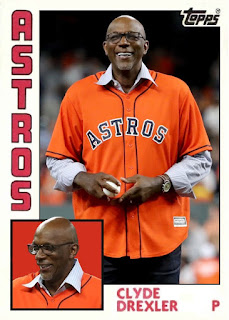 Born in Nigeria, Hakeem Olajuwon was a teammate of Drexler's at the University of Houston. Olajuwon was selected by the Rockets with the first pick in the 1983 NBA draft, He played  He played 17 seasons with the Rockets, before finishing his career with the Toronto Raptors for one season. He won two championships (both when Michael Jordan was temporarily retired, I must add) and was inducted into the Hall of Fame. Olajuwon tossed a first pitch for the Astors to get his Celebrity Jersey Card, unless it was all a "dream." 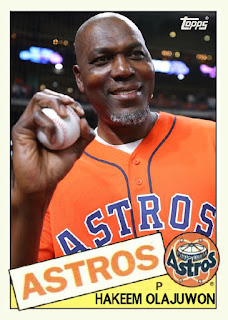