John Bullard is the owner-promoter of Chicagoland Championship Wrestling, which debuted last year. My first interview with John at On the Beat With John Bullard gives a little more background info on him and CCW. You can also search Johngy's Beat for other CCW coverage.

After the successful debut, the next event was planned for April 17. Unfortunately, due to the ongoing pandemic, John made the tough, but wise, decision to move the next CCW event to June 12.

While it is disappointing, it is understandable and the best thing to do. John has put a lot of effort into doing CCW right. He could have held a smaller version of the event without postponing it, but it wouldn't be the same. Moving it a couple months won't hurt anyone and it will only give John more time to make it bigger and better (if that is possible).

I know I'll be in Michigan City on June 12. I'll be joining my fellow Chicago Connection mates there, although I'll be covering the event and they will be collecting championships, or so says Connection leader PL Myers.

To learn more about John and CCW, go to ChicagolandChampionshipWrestling.com. Also, check the Chicagoland Championship Wrestling page on Facebook to get more frequent updates and news. Check back here for my recurring coverage of CCW. 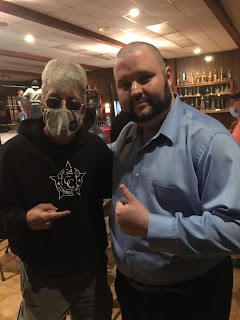