Bernie Federko was selected seventh overall by the Stt. Louis Blues in the 1976 NHL draft. He went on to play 13 seasons for the Blues and one final season with the Detroit Red Wings. The Blues retired his #24 and he was inducted into the Hockey Hall of Fame in 2002. When the Cardinals honored the St. Louis legend, he threw a strike and won a spot on a Celebrity Jersey Card. 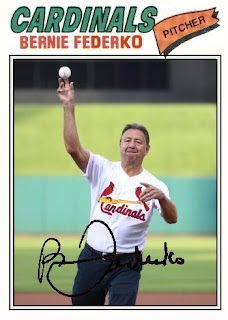 Paul Kariya was selected by the Anaheim Ducks with the fourth overall pick in the 1993 NHL draft. He would go on to play nine seasons with the Ducks, one season with Colorado, two seasons with Nashiville and three seasons with the St. Louis Blues. The Ducks retired his #9 jersey. Among his many awards are two Lady Bing trophies and an Olympic Gold medal. His brother Steve played three seasons with the Vancouver Canucks. Kariya earned another honor by getting a Celebrity Jersey Card for his first pitch in St. Louis. 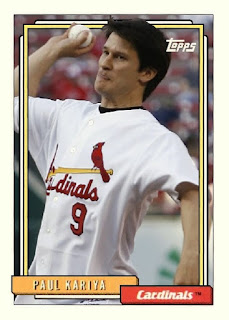