The Dallas Wings held a press session from Training Camp featuring. Kayla Thornton started the session and was followed by Moriah Jefferson. That interview session can be found at On the Beat With the Dallas Wings 05/11/2021.

Thornton talked about being the team veteran and working on her defense in camp. At 28, forward Thornton is in the unique position as the team's oldest player. Undrafted out of the University of Texas at El Paso, Thornton signed with the Washington Mystics for the 2015 season. After spending the 2016 season away from the WNBA, she returned with the Wings in 2017 and has been there since. Now entering her fifth season with the Wings, Thornton finds herself as the team vet (in age and tenure), a role she relishes, but doesn't really consider much. It's still just business as usual.

Jefferson discussed the team jelling with all of the new players, including Charli Collier, the top pick in the recent draft, her training camp and the importance of a woman as a coach. Point guard Jefferson was a star at UConn before being selected with the second overall pick by the San Antonio Stars in the 2016 WNBA Draft. Prior to the 2019 season, Jefferson was traded to the Wings. Jefferson only trails Thornton and Isabelle Harrison as the team's oldest player.

Last season, the Wings were 8-14, in last place in the Western Conference. Because the WNBA lumps all teams together for the playoff standings, the Wings actually finished one game behind the Washington Mystics for the eighth and final playoff spot.

In addition to Collier, the Wings had three other first round draft picks. Chelsea Dungee, Dana Evans and Awak Kuier join Collier as the 2021 rookies. The youthful Wings have 14 players still on their roster. These players average 1.6 years of WNBA experience.

Vickie Johnson is the new coach. Johnson entered the WNBA as a player with the New York Liberty in 1997, after a stellar career at Louisiana Tech. Selected in the second round (12th overall), Johnson played nine seasons with the Liberty and four more with the San Antonio Stars before retiring. She began her coaching career as an assistant with the Stars in 2011. She was named coach of the Wings during the last offseason.

Jefferson talked about the importance of a woman and a former player becoming a coach. Recently, I also talked with former player Val Whiting about the same topic. With no disrespect to male coaches like Bill Laimbeer, Dan Hughes and any other, I think it is important for the league to promote former players into coaching and team management.

Go to WNBA.com for more info and news on the Wings and the WNBA. Also, check here, GlobalTravelerUSA.com, GlobalWomensSportsRadio.com and Patch.com for my recurring coverage. 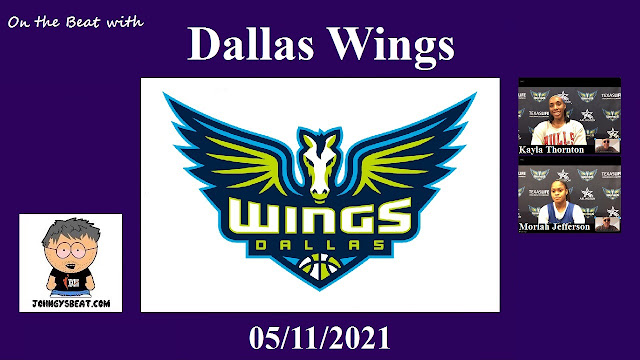