The Indiana Fever has a record of 1-9, worst in the WNBA. Their only win was at home against the Washington Mystics. Even worse, they have been beaten by an average of 18 points per game, with their last loss a 35 point drubbing by the Los Angeles Sparks.

The Fever travels to Chicago for a Wednesday game against the struggling Sky. That's followed on Saturday by a home game against the Sky. This two game series is a rare time where both teams have a chance to start turning around their season. Two wins for either team would be big.

Even though she only played 23 games with the Sky, it's enough to give just a little extra incentive, not that she needs it. Lavender spoke openly about how she heard the news and how she feels.

Both Lavender and Mitchell also talked about how their individual seasons are going and their roles on the team. Lavender is averaging 6.1 points per game, while Mitchell is at 14.1 ppg. That's 27 percent of the team's scoring. The Fever is actually fourth in the WNBA in scoring.

Coach Stanley also discussed the early season schedule. The Fever played 10 games in the first 21 days of the season. That doesn't allow much time for preparation or recovery, but Coach Stanley is not using that as an excuse.

The upcoming two game series features teams with a combined 3-16 record. Despite that, this series is important to both teams. A split seems likely, but both teams need a sweep.

The media session is at On the Beat With the Indiana Fever 06/07/2021. For more information on the Fever and the WNBA, go to WNBA.com. Also, check here for my recurring coverage. 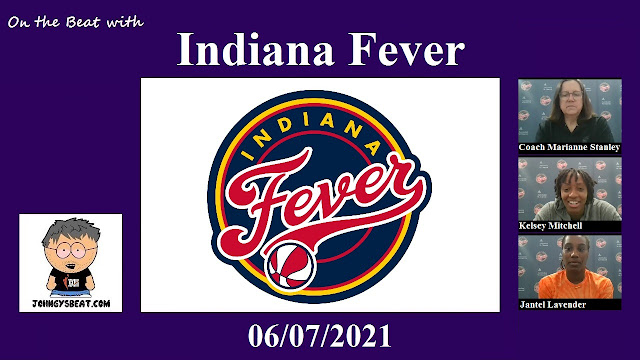