Earlier this week the New York Liberty held a midweek media session featuring Reshanda Gray and Betnijah Laney. Considering the Liberty are coming off of three straight losses, the players were incredibly upbeat.

Gray started the session talking about player movement in the league. On her fifth team (plus a return to the Liberty) in seven seasons, Gray knows a bit about this topic.

After starring at the University of California, Gray was selected by the Minnesota Lynx in the second round (16th overall) of the 2015 WNBA Draft. After only 10 games with the Lynx, she was traded to the Atlanta Dream. Prior to the 2017 season, she was traded to the Connecticut Sun, but was waived in training camp. She signed by the New York Liberty before the 2018 season. She played with the Los Angeles Sparks in 2020 and signed back with the Liberty this season.

Gray was incredibly positive about her experience and is happy to bring that same level of positivity to the court with the Liberty. All told in her career, Gray has averaged 3.4 rebounds and 4.0 points per game, but she also contributes intangibles that don't show up in the scoresheets.

Gray continued by discussing the state of the team, including her play. Laney followed Gray on that same topic. The players gave insight into the mental state of the team. With three straight losses, the confidence level is still high and the attitudes are positive.

Laney also discussed her approach to the game and the team. She is happy to be with a team who utilizes her skills and appreciates her and she knows her role on the team.

Like Gray, Laney is also well-traveled. Selected by the Chicago Sky in the second round (17th overall) in the 2015 WNBA Draft (ironically, right after Gray). Two seasons in Chicago were followed by a year out of the league. She returned in 2018 and spent the next four seasons with four different teams. Laney has averaged 3.0 rebounds and 7.o points per game for her career.

The Liberty will try to snap their skid at Phoenix on Sunday. That game is followed by consecutive road games at Las Vegas. Losing to the Mercury would make it even tougher to face the Aces. The Liberty need to beat the Mercury and be at the top of their game for the Aces.

These back-to-back games are interesting tests, as well as potential preparation for the playoffs. Teams need to make quick adjustments between games with these mini-series, just as they will in the playoffs.

The interview session can be found at On the Beat With the New York Liberty 06/08/2021. Go to WNBA.com for more news on the team and the league. Check back here for my recurring coverage. 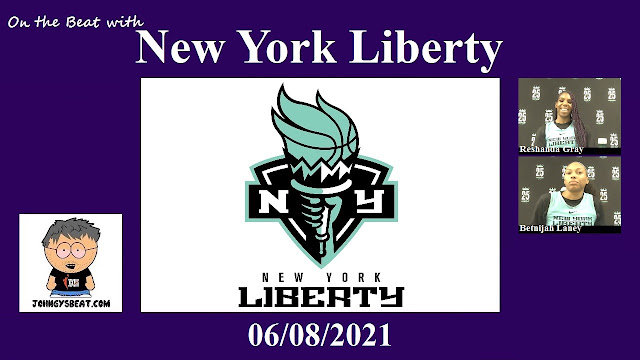