Last October, Chicagoland Championship Wrestling debuted in Michigan City, Indiana. On Saturday, June 12, CCW returns for their second show and what a show it will be!

As last time, I again talked to Steve Ahrendt and Joey Roth, who watched the show up close as the broadcast team. Who better to speak of the product than the two men who called the action?

CCW's debut show was sold out, as is this upcoming show. You will still be able to watch it though on several platforms sometime soon after the event.

As Steve, Joey and I discuss in the interview, any of those matches could be a headline match. CCW owner-promoter John Bullard built a card full of top notch talent pitted against each other.

The above match list doesn't even include the Chicago Connection led by "The Shot to the Top" P.L. Myers, one of best managers in the business. Nor does it mention C Red, another top manager, who is also a veteran wrestler. There's also Garrisaon Creed, Chip Walker and others. They will all be there June 12.

Much like John built this card, he has built CCW. Despite delays and obstacles caused by the pandemic, John has methodically built a wrestling company from the ground up. Taking no shortcuts, he has gotten the top talent, partnered with excellent companies and has his product shown on major broadcast platforms.

Wrestling is full of hyperbole. As a reporter, I must separate hype from reality. I don't work for CCW, nor am I part of the show. If I didn't believe in the product, I might not bash it, but I certainly wouldn't praise it.

It seems a new wrestling company debuts every month. Great hype and anticipation comes with each announcement. CCW quickly set itself apart from the pack however. Most of the buzz surrounding CCW comes from the talent and the fans. For the most part, John has allowed his product to do the talking.

Steve, Joey and I discuss all of this and more. There's not a dull moment with these two. They are entertaining on the broadcasts, in interviews or just chatting casually.

Since I do not work for CCW and this event is sold out, why am I writing about it? I believe in the product and I want to expose the product to others. CCW's third show is August 21 and it isn't sold out...yet. Tickets will be selling fast at the June 12 show though. Wrestling fans or anyone who simply likes entertainment should get a ticket to the August 21 show ASAP, because when I write my recap of the June 12 show here, I might be talking about another sell out already.

As always, I thank Joey and Steve for their time and consideration. I also thank CCW and John for allowing me access to the product and talent roster.

Our interview can be found at On the Beat With Steve Ahrendt & Joey Roth of Chicagoland Championship Wrestling. For more info, check out ChicagolandChampionshipWrestling.com. 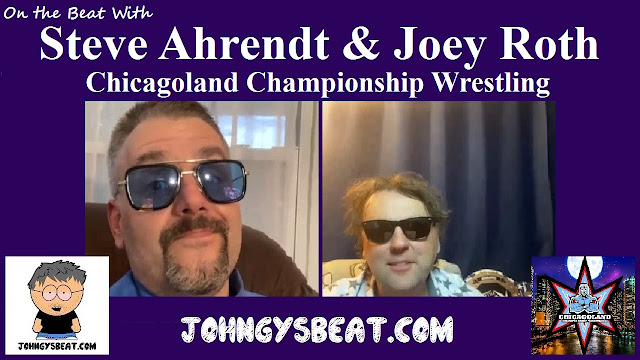