The Atlanta Dream held their first media session after the break for the Olympics. It was also the first session for new interim Head Coach Darius Taylor. Monique Billings and Aari McDonald joined Coach Taylor. Obviously, a good portion of the session focused on the transition to Coach Taylor.

Talking about such a transition is always difficult, especially when it is midseason and the departing coach is staying in the organization in a different role. You don't want to insult the old coach, but you want to show excitement for a fresh start. All involved handled it well, citing the positive side of the new coach.

One of the main goals for the Dream is stability. Coach Taylor will be the third coach in the last two seasons. Add in the ownership issues and political issues and you have a team looking for peace and consistency.

Departing Coach Mike Petersen stated from the start he was not in it for the long haul, but I don't think anyone expected this quick end. Coach Taylor has not made his intentions known, but one would assume he is looking to remove the interim tag and take over the team completely. It's a grat opportunity for him and for the team. Hopefully, it is the first major step in getting the Dream back on track.

The Dream currently sit in fifth place in the Eastern Conference with a record of 6-13. They are tied with the Los Angeles Sparks for the 10th spot in overall league standings, ahead of only the Indiana Fever at 4-16. Indiana has won three straight going into the break, while Atlanta dropped six of their last seven.

The Dream have 13 games remaining as they try to climb back into playoff contention. They face Phoenix (9-12) in their first game back, followed by two with Los Angeles. Sweeping those three games would put Atlanta back into the playoff picture, but two of three seems to be the minimum. They cannot afford to lose ground to Los Angeles.

With the new coach in place, things are positive right now in Atlanta. The next 13 games will determine how positive things stay and possibly if Coach Taylor''s future.

You can find the video at On the Beat With the Atlanta Dream 07/29/2021. Check back here for my recurring coverage of the WNBA. 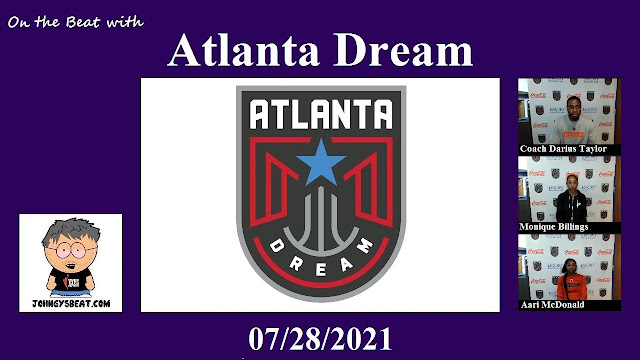