Born in Delaware, Ryan Phillippe landed a big role when he played Billy on One Life to Live,  the first gay teenager on a soap opera. Phillippe went on to an excellent career on television and the big screen, acting, directing and producing. Phillippe made an appearance at a Philadelphia Phillies game, which would have been close to his Llanview home on OLTL. That was good enough to land him on a Celebrity Jersey Card. 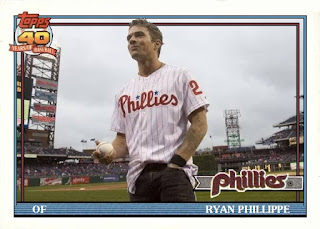 Bruce Willis was born in West Germany and grew up to be a Hollywood legend. After breaking out on television's Moonlighting, Willis went on to become a megastar. He even has had a bit of a music career, one that I think is underrated. I enjoyed The Return of Bruno. Willis also showed his form as a lefty, tossing out the first potch for the Phillies and landing on a Celebrity Jersey Card. 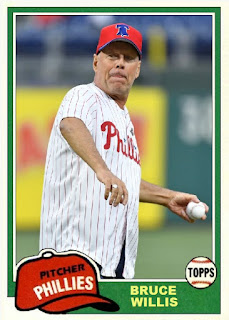