The Connecticut Sun held an off day media session featuring Head Coach Curt Miller and players Brionna Jones and Natisha Hiedeman. It was an interesting session as topics were mostly more casual than usual, but also because Hiedeman took over as coordinator for her segment.

Coach Miller opened the session discussing the stretch of games before the break and then the break itself. The discussion turned to first-time All-Star Brionna Jones. Coach Miller gave his assessment of her improvement, including the impact her nutrition has. That led the conversation to the overall nutrition of the team.

Jones followed Coach Miller by talking about how she feels now with her play progressing to a higher level. Part of that success is from being in the best shape of her life. Jones discussed that and gave a glimpse into her nutritional and cooking habits.

Hiedeman finished the session by taking over for Media Coordinator Annette Hogan, who turned over the reigns. Hiedeman called on the reports, instead of Hogan, something I had not seen before, but all had fun with it.

A native of Wisconsin and a former player at Marquette in Milwaukee, Hiedeman talked about cheering for the Milwaukee Bucks and rooting for them to win the NBA championship.

She also talked about the recent practices and preparing for Atlanta. She's excited about playing Atlanta and Courtney Williams.

The talk moved to her mindset off the bench. Splitting time as a starter and a bench player, Hiedeman talked about bringing the same level of enthusiasm and energy whenever she plays. She ended that bit with a poignant bit of advice to enjoy every minute.

I found that last statement especially interesting. I always like to know if the players are able to soak in the reality of what they are doing. Are they able to enjoy the moment or are they too focused on the game? Obviously, Hiedeman does both.

The session finished with Hiedeman and Hogan joking about the roles in media sessions. Applause to both for making the Sun sessions some of the most fun, while still being informative.

The Sun host Atlanta Friday and travel to New York for a Sunday game against the Liberty. Then they go on break for the Olympics. They stand at 12-6 in first place in the Eastern Conference and third overall (significant, since the WNBA reseeds without conference designation for the playoffs).

The media session can be found at On the Beat With the Connecticut Sun 07/08/2021. Check back here for my recurring coverage of the WNBA. 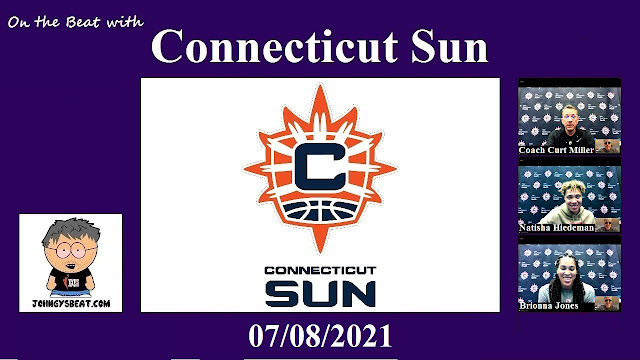