The Las Vegas Aces held an off day media session featuring Head Coach Bill Laimbeer and players Riquna Williams and Dearica Hamby. The main topics covered were the upcoming Olympics break, parity in the WNBA and the Phoenix Mercury, their next opponent.

Coach Laimbeer started by waking us through the plans for the Olympics break. The team will take off about three weeks, before returning to practice. The break comes at a time when the Aces are rolling, even without Angel McCoughtry, who is out for the season with an ACL injury. The Aces are tied with the Seattle Storm for the best record in the WNBA at 14-4. The hope is all the Aces return in shape and regain midseason form quickly. Unfortunately, there will only be a few full team practices upon the return before the first game.

The next topic was the Phoenix Mercury and Diana Taurasi. Obviously, Coach Laimbeer has tremendous respect for Taurasi, but he was also quick to bring Brittney Griner, Skylar Diggins-Smith and others into the conversation. Despite a 7-9 record, the Mercury is a talented team.

Lastly, Coach Laimbeer discussed the parity of the league. Seattle, Las Vegas and Connecticut clearly have the best records and the rest of the league is hovering around the .500 mark or worse. Coach Laimbeer felt there would be even more separation between the best, middle and worst coming soon.

Williams also addressed the competitive balance of the WNBA, by saying she doesn't think about other teams. Her focus is only on the Aces.

She is looking forward to the break, but she also wants to get back to the action. The Aces are going for the title and to get that title, they need to be back on the court.

Last in the session, Hamby started by talking about the Sixth Woman of the Year award. She has won it the last two seasons and is in the running again this season. He recent double-double off the bench definitely helps her cause. Ever humble, Hamby stated it sould be cool, but there are also several other talented sixth woman possibilities around the league. Despite naming other players, I think Hamby is the frontrunner right now.

Hamby also discussed playing Phoenix and Taurasi. mentioning their talent. She also gave a glimpse into the strategy of the Aces.

To finish the session, Hamby talked about her shot that beat the Chicago Sky in last season's playoffs. That buzzer-beating halfcourt bomb was called the "Shot of the Year" by WNBA.com. As a Chicago fan, that shot hurt, but I had to respect her for making it. I watched that shot several times that night and many times since. Hamby laughed a bit, saying she really hasn't watched it that much, except when it is shown online or on sports shows.

Las Vegas hosts Phoenix tonight, then Minnesota on Friday, before finishing the first part of the season at Dallas. The Aces should sweep those games and go into the break 17-4. Meanwhile, Seattle has five games left, home against Atlanta and home-and-away versus Los Angeles and Phoenix. Seattle should win all five and go into the break at 19-4.

Las Vegas and Seattle should end the season 1-2 in the Western Conference. Because the WNBA ignores conferences when seeding for the playoffs, the Aces and Storm would still be the top two seeds in the playoffs. Like last season, they wouldn't meet each other until the Finals, should they both advance that far. Right now, I'd have to say that is the most likely scenario.

That media session can be found at On the Beat With the Las Vegas Aces 07/06.2021. Check back here for my recurring coverage of the WNBA. 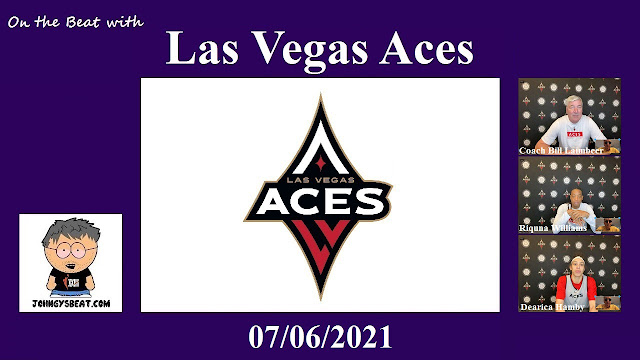