Less than a week after Athletes Unlimited Lacrosse ended, AU Softball started its second season. After a year away from live action, it was great to be back live "On the Beat" in Rosemont.

Opening Weekend for Athletes Unlimited Softball featured the first no-hitter in AU history, walk-off home runs and more all played in front of a packed stadium in Rosemont. Softball was back and fans couldn't have asked for more.

Despite her dominating performance, Osterman is in the unfamiliar second spot on the leaderboard with 490 points. Sahvanna Jaquish claimed the top spot with 498 points. Tori Vidales (468 points) and Lilli Piper (438 points) round out the top four spots. These four will be captains next week, drafting those teams later today. Just missing the top four were Odicci Alexander (428 points), Haylie McCleney (420 points) and Aliyah Andrews (418 points).

The individual game MVP's were:

The Ballpark in Rosemont never looked better. In the right field concourse, there is a batting cage and a pitching area. There is a merchandise truck out front, featuring a large line of cool AU apparel. In-game host Kacy Standohar is all over the place, interviewing players and having fun with fans. The Ballpark was alive.It was a fantastic Opening Weekend and it looks to continue all season.

AU returns to the field Saturday, September 4 at 3 PM CST. Team Osterman battles Team Vidales. For the second game, Team Jaquish faces Team Piper at 6 PM CST. Check GWSR social media for updates and back here for the Week Two recap. Also, be sure to check out AU Softball coverage by Bruce Miles on AUProSports.com for more info on the league and players. 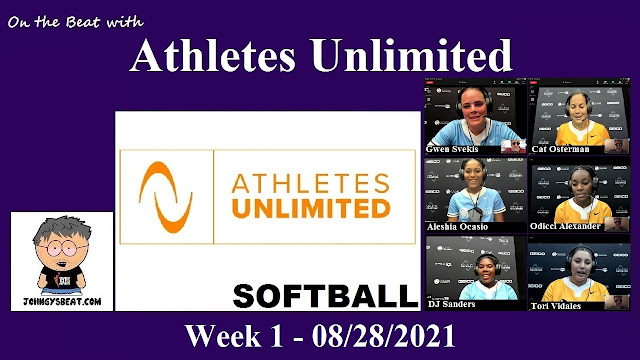