A Night of Music With Erik Donner

Ral Donner was a singer with several hits in the 1960s. He had a voice similar to Elvis Presley, but a style all his own.

My friends turned me on to his son Erik, also a musician. Yesterday, I finally had the chance to see Erik perform. We all met at Avanzare, a classic Italian restaurant west of Chicago, where Erik was the happy hour entertainment.

Although I enjoyed many of his performances online, seeing Erik live brought a new appreciation. He has an amazing raw energy and a connection with his audience. I definitely heard his dad's influence in his singing, but this wasn't a novelty act.

For more than two hours, Erik delighted the crowd with his takes on songs, mostly from the 1960s and ‘70s, including a couple of his dad's hits. Taking requests, Erik showcased his range. Erik sprinkled in just enough banter to add to the show, without taking away from his music.

Wanting something light in the summer heat, I ordered the pear salad, a mix of poached pears, arugula, almonds and goat cheese with a lemon dressing. I was looking forward to this salad since we planned the outing.I was hooked as soon as I saw goat cheese was in the salad!

After the show, Erik came over and talked for a bit. He gave s a few facts about his dad, including him providing voice-over narration (in the voice of Elvis) in This Is Elvis, a 1981 film. Displaying a deep respect for his late father, Erik is carrying on the Donner legacy in his own way. His father would be proud. 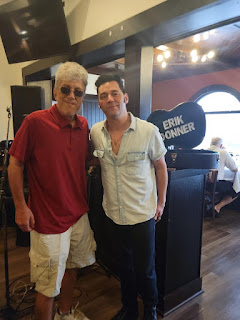