Pinfalls is back, with a look at WWE's SummeSlam PPV airing Saturday, August 21, starting at 7 PM EST with the kickoff show. For Pinfalls: WWE SummerSlam 2021, Candace Cordelia and I are joined by guest analyst Tommy Else.

Tommy comes to us with a resume that includes his current reign as the Southside Occupational Academy champ and a former stretch as a tag team champ (with Brady Pierce in Body Magic) at Resistance Pro Wresting. A personal trainer by trade, Tommy is also my co-host on The Johngy OR Else Podcast.

The three of us delve into the card, which is as follows:

Candace and I are 11-7 over the first three episodes of Pinfalls. Last month's guest Adam Barnard was 4-3 to take the victory for Pinfalls: Money in the Bank. Therefore, Tommy is not only competing against us this month, but against Adam's record.

In addition to our SummerSlam analysis, we discuss the possibility of Charlotte Flair leaving the WWE for All Elite Wrestling or elsewhere. With her husband already in AEW and her father rumored to be on the way here, will Charlotte follow?

We end with a general discussion of AEW, including tonight's Rampage event at Chicago's United Center. Tommy and I will be there watching and Candace will be there in spirit, but will CM Punk be there? We talk about him, AJ Lee and other intersting possibilities.

Remember WWE SummerSlam airs Saturday, not on Sunday, as usual. Enjoy the show and come back here for the recap, including how accurate the three of us were.

This episode can be found at Pinfalls: WWE SummerSlam 2021. 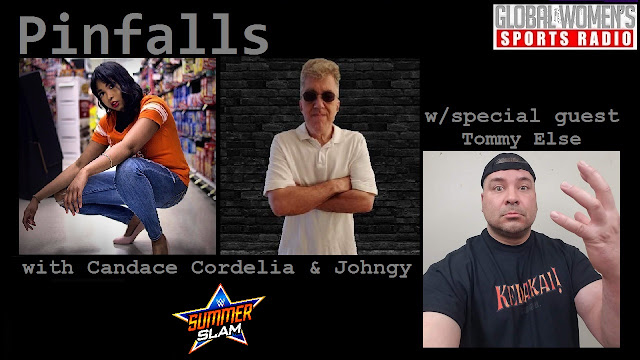