Cards That Never Were i a recurring series in which I create virtual trading cards for players missed in various sets over the years. It is a concept I have borrowed from far too many folks to list, but I appreciate all of their efforts. Many such creations can be found in the Custom Baseball Cards group on Facebook (and not just baseball cards).

After a successful career at the University of Connecticut, running back Vince Clements was selected by the Minnesota Vikings in the 4th round of the 1971 NFL Draft. After seeing no action in 1971, he was traded by the Vikings in a huge deal with the New York Giants. Clements, Norm Snead, Bob Grim, a first rounder in 1972 (24th overall–Larry Jacobson) and a second rounder in 1973 (40th overall–Brad Van Pelt) were sent to the Giants for Fran Tarkenton in January 1972. Clements played two seasons for the Giants, before moving on to the World Football League's Honolulu Hawaiians.

For his efforts, Clements received a card in the Topps 1974 set, which would be a career capper. Nobody produced cards for the WFL, leaving only a 1973 Topps card missing. I had searched for an image for years, but Lynn from the aforementioned FB group, found one first and produced this awesome card 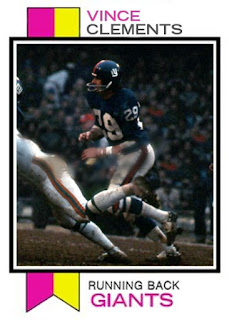 He does have a custom card on the Hawaiians, www.wflfootballcards.com

Cool. I never saw that!