Chicago area native Haley Reinhart is my favorite singer of this century. I have seen her in concert and met her three times. I was supposed to do it all again last year, but the concert was canceled due to the pandemic. long with having a powerful voice, Reinhart especially likes music from the 1960s, which is another reason why I really like her music. Reinhart sang the National Anthem for the Detroit Tigers, but had to wear a Tigers jacket over her jersey because of the cold Michigan weather at the time. Because she is still wearing a jersey and she is one of my favorites, I definitely was going to make a Celebrity Jersey Card for her. 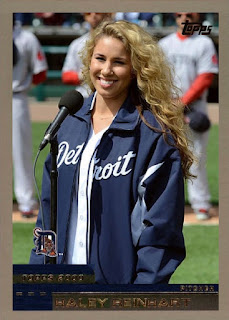 Actress, singer, song writer Christina Milian was born in New Jersey, but raised in Maryland. Milian originally wanted to be an actress, but started in the music industry. She would eventually do both. Milian has openly talked about the challenges of being Afro-Latina. She also had her own reality show for a while. Milian wore a Tigers jersey in her private life, but it's good enough to land her on a Celebrity Jersey Card. 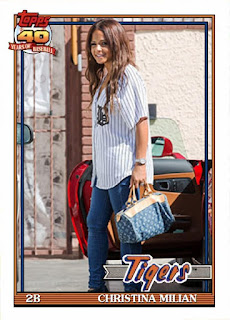