On the Beat With Victor Dandridge Jr. at Wizard World 2021

My coverage of Wizard World 2021 continues with an old favorite. Victor Dandridge Jr. calls himself "the hardest working man in comics" and I can't argue with him. I also ask him about it in our interview, but more on that later.

I met Victor many years ago and was amazed at his work. Soon after that first meeting, I did an interview with him, which can be found at On the Beat With Victor Dandridge at Wizard World 2013.

A lot has happened since then. Victor has cemented himself as a true force in the comics industry and it couldn't have happened to a nicer guy. I have seen Victor many times at comic cons and he always has time to catch up, despite his insanely busy schedule.

Vantage:Inhouse Productions is the creator-owned imprint of Victor Dandridge. Launched in 2011, V:IP has published some of the most thought provoking and engaging properties to come out of the small press, including the award-winning all-ages title, Wonder Care Presents: The Kinder Guardians, best-selling hit, The Samaritan, and the critically acclaimed series Origins Unknown, The Trouble w/Love, as well as the sci-fi novella, 8 Mins.

In addition to entertaining, Vantage:Inhouse aims to encourage and inspire future creators through its U Cre-8 Comics brand, an education-based line of products and programming designed to bridge comics with classroom fundamentals.

h so many projects in the works, V:IP will continue to be one of the leading voices in small-press publishing and MORE!!

The Vantage: Inhouse Productions website has so much great comics greatness. You can buy comics, see comics, get comics help and more. I write a lot about athletes growing their sport and passing it to future generations. Victor is doing the same in the comics world and we are all better for it.

My interview with Victor can be found at On the Beat With Victor Dandridge at Wizard World 2021. Check back here tomorrow for more Wizard World coverage. Also, check WizardWorld.com for the latest news and updates. Besure to check out vantageinhouse.com to see all of his great work and latest projects. 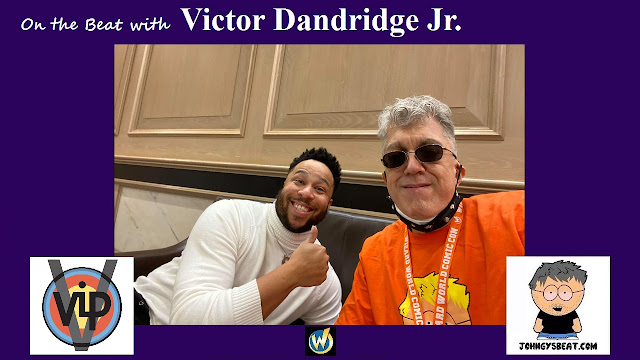