Cards That Never Were is a recurring series in which I create virtual trading cards for players missed in various sets. It is a concept I have borrowed from far too many to list, but I appreciate all of their efforts. More of my creations and many great creations of others can be found in the Custom Baseball Cards Facebook group (and not just baseball cards).
After playing his college ball at Ohio State, Brian Bashnagel was selected by the Chicago Bears in the 3rd round of the 1976 NFL draft. Baschnagel played nine seasons with the Bears, but unfortunately spent the 1985 Super Bowl season on the injured reserve list. For his career, Baschnagel played in 129 games, catching 134 passes for 2,024 yards and nine TDs.
For his efforts, Topps gave Baschnagel cards in their sets from 1977 through 1983.That left 1984 and '85 missing. Despite not retiring until after the '85 season, I am calling the '85 card his "career capper" and not making an '86 card.
There aren't a lot of Baschnagel pictures online, but there were enough to fill the gaps. Lynn from the Facebook group Custom Baseball Cards created the 1984 card. and I created the '85 card, which is from one of my favorite sets. The '85 card also features Defensive Coordinator Buddy Ryan. 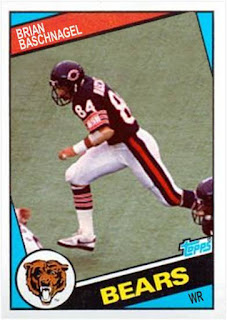 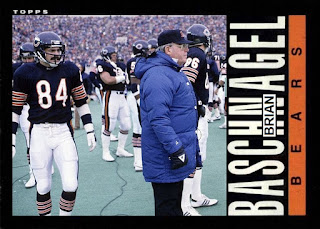