Born in Kentucky, Brian Pillman Jr. is a second generation wrestler. His father, "The Loose Cannon" Brian Pillman also played pro football with the Cincinnati Bengals. Unfortunately, Brian Sr. died way too young, but Brian Jr. is carrying on the legacy, while making his own name at All Elite Wrestling. Of course, for his Celebrity Jersey Card, he is repping the Bengals, but not his father's #58. 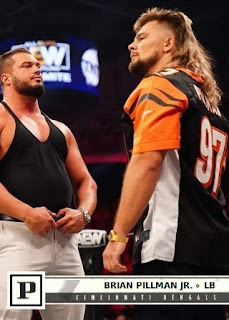 Brian Heffron was born in Philadelphia, PA and has stayed true to his roots throughout his career. He gained fame as "The Blue Meanie" in the now defunct ECW and later in the WWE. Heffron is a big fan of all Philly sports teams. His previous appearance on a Celebrity Jersey Card showed him in a Phillies jersey. Now, he reps his beloved Eagles. He still needs the Sixers and the Flyers to complete the Grand Slam. 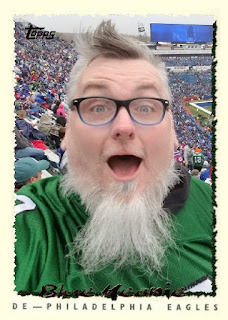