Cards That Never Were is a recurring series in which I create virtual trading cards for players missed in various sets. It is a concept I have borrowed from far too many to list, but I appreciate all of their efforts. More of my creations and many great creations of others can be found in the Custom Baseball Cards Facebook group (and not just baseball cards).
Jack Youngblood played college ball at Florida before being selected by the Los Angeles Rams in the 1st round of the 1971 NFL draft. Youngblood went on to play 14 seasons with the Rams, carving out a Hall of Fame career. He missed one game in his career, that being in his final season. He also played in the Super Bowl with a broken leg. He was as tough as they come.
For his efforts, Topps gave Youngblood cards 1973 through '85. They only missed a rookie card in 1972. I found a nice action shot to use for a '72 virtual card to fill that void. 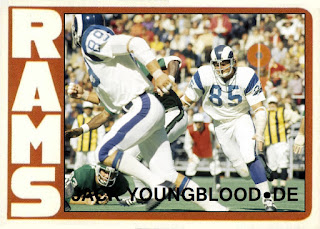