Velvet Sky ha appeared here many times, thanks to her NFVel poster series. She has had a great career, winning several titles with tag team partner Angelina Love and as a singles wrestler. Velvet is currently working in the NWA as an announcer. Injuries shortened her career and probably will prevent her from returning to the ring. The best news for men though is she recently announced her breakup with Bully Ray. I'm sure she won't be single long. For Velvet's latest Celebrity Jersey Card, she is wearing a Buffalo Bills #28 jersey, most notably worn by running back Greg Bell. 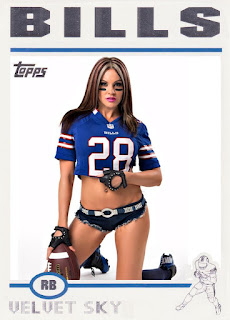 Melina Perez recently returned to in-ring action after a bit of a hiatus. Despite a lot of success, Melina might be best known for her unique ring entrances, where she did the splits as she climbed into the ring. For her Celebrity Jersey Card, Melina wore the Pittsburgh Steelers, which was worn most notably by wide receiver Hines Ward. Melina gets extra poits for the football and wristbands. 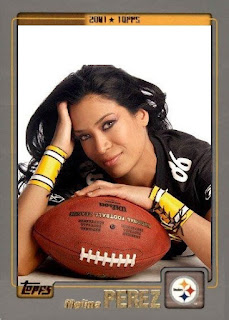 Sky high - she sure does not look like a wrestler.