On the Beat With DePaul WBB Game One

First year player Aneesah Morrow was the star of the night. Playng her first regular season game, Morrow scored 31 points on 13-16 shooting. She is the first player in Coach Doug Bruno's DePaul career to score that many points in her freshman debut.

Morrow also grabbed a team-leading nine rebounds, falling just one short of a double-double. This prompted Coach Bruno to take a lighthearted jab at Morrow in the post-game media session for not hitting that milestone. Not missing a beat, Quigley retorted Coach Bruno should have kept Morrow in the game. This exchange caused a nice round of laughter from all.

Rounding out her dominating performance, Morrow had four steals and three blocks. Media members in press row were trying to recall any first game performance like this.

This game was never in doubt. TSU scored the first points, but DePaul took over from there, leading 35-18 after the first quarter and 60-27 at halftime. DePaul and Morrow were so dominating, Morrow actually matched TSU in scoring in the first half.

The lead was so big, Coach Bruno was able to give his bench a lot of playing time. Even with bench players in the game, DePaul played even with TSU as they cruised to the 43 point win.

In addition to Morrow, three other Blue Demons finished in double digits. Deja Church had 21, Dee Bekelja had 17 off the bench and Darrione Rogers poured in 11. Lexi Held had seven assists and six points.

It was a bit surreal in the post game media session with DePaul great Quigley sitting next to the rising star Morrow. It was a total feel good session, as all celebrated DePaul's past and future.

On Monday, Quigley, Coach Bruno and Held participated in a Zoom press session which can be found at On the Beat With Allie Quigley, Coach Doug Bruno & Lexi Held. 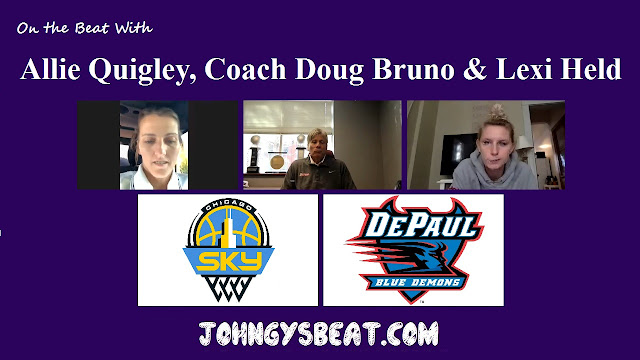