Michigan born Anthony Kiedis is a founding member and lead vocalist of the rock band Red Hot Chili Peppers. Kiedis, Hillel Slovak and Flea formed the band in 1983. The band was inducted into the Rock and Roll Hall of Fame in 2012. Kiedis' father, Blackie Dammett, was an actor, who has appeared in more than 50 movies and television shows. The Chili Peppers sang the National Anthem at a Los Angeles Rams game, with Kiedis earning his Celebrity Jersey Card. His #16 was most notably worn by receiver Danny Amendola. Of course, it was also the number Warren Beatty Wore in Heaven Can Wait. 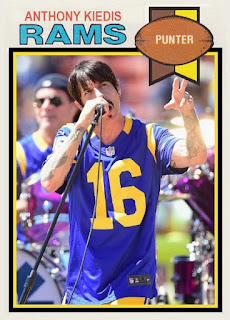 Michael Balzary was born in Australia and rose to fame as Flea. He is regarded as one of the top bassists, having been ranked number two by readers of Rolling Stone, behind only John Entwhistle of The Who. For his Celebrity Jersey Card, Flea is wearing #3, which doesn't have a huge legacy with the Rams. Kicker Frank Corral is probably the most successful #3. 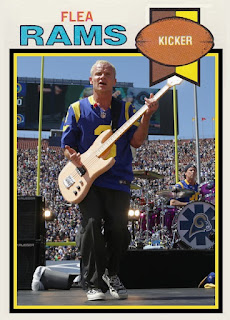