Celebrity Jersey Cards is a weekly series in which I create virtual trading cards for celebrities wearing sports jerseys. Today I celebrate the two teams playing in the big game (am I allowed to call it the S**r B**l or is that copyrighted?)

Born in Culver City, CA, actor Taran Killam is a big fan of the Los Angeles Rams. Killam's first film role was in Naked Gun 33 1/3. From there he has gone on to many television and movie parts. Certainly no bandwagon jumper, Killam has been seen at many games wearing several different jerseys. He has worn #99 among others, but for this Celebrity Jersey Card, I cannot make out his number. 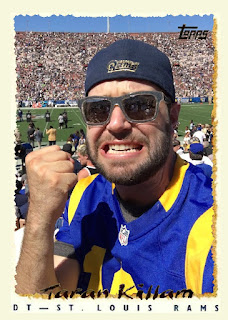 Bootsy Collins was born in Cincinnati, OH and grew up to be an accomplished musician. Not just a Cincy treasure, Collins has performed with legends such as James Brown and Funkadelic. Collins has been spotted several times wearing the stripes of his Bengals, including in at least one of his music videos. His Celebrity Jersey Card is certainly funkadelic! He is seen wearing #1, which was worn most notably by Ja'Marr Chase (actually, only Chase has worn #1.) 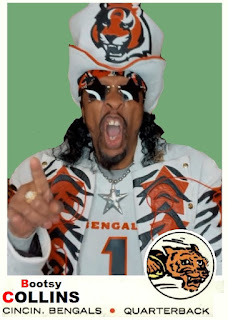