On the Beat With Jean Fruth

Jean Fruth has carved an impressive legacy in baseball. From the Major Leagues to sand lots in Latin America, Jean has photographed the big moments, the simple times and everything in between. She doesn't just take pictures of baseball. She photographs moments to tell the stories of baseball.

From her start covering the San Francisco Giants, San Francisco 49ers and the Oakland A's, Jean moved on to working with the National Baseball Hall of Fame and Museum. She is a traveling photographer for La Vida Baseball, a digital media company telling the story of Latino baseball in the United States and Latin America. Jean is recognized by Sony as one of its 45 Sony Artisans of Imagery.

I had the pleasure of talking to Jean about all of this, but really only skimmed the surface of all Jean has done and is doing. I hope this serves as an introduction to Jean and her work, with other interviews to follow, including one about an upcoming project, once it is announced officially.

One thing that came through clearly is Jean's passion for the history of baseball and growing the sport. Jean speaks with reverence about the heroes of the game, like Johnny Bench, Cal Ripken, Vlad Guerrero and others. It's all even more remarkable when you hear Jean's start in photographing baseball.

Jean's career path is really a love story. She isn't about the grandeur, spectacle and limelight. She finds as much joy in a group of kids playing on a dirt field somewhere as she does a World Series game. Perhaps even more, because it is in those off the grid moments when youngsters fall in love with baseball. It is those moments Jean wants to capture.

Her websites aren't filled with pictures of Jean hobnobbing with baseball royalty. Of course, there are pictures of Jean with some legends and at big games, but the focus is clearly on the players and moments that make the game. I have spent a lot of time just getting lost in her pictures, recalling my connections with some of the players and imagining the moments of others.

If you're a baseball fan, you will absolutely love Jean's work. If you aren't a fan, you will still love her work for the stories her photographs tell.

Jean's Grassroots Baseball: Route 66 is due out in April. Check her website or here for updates and info on that book and other projects.

The interview is at On the Beat With Jean Fruth. Also, check JeanFruthImages.com and GrassrootsBaseball.com for more info and news. 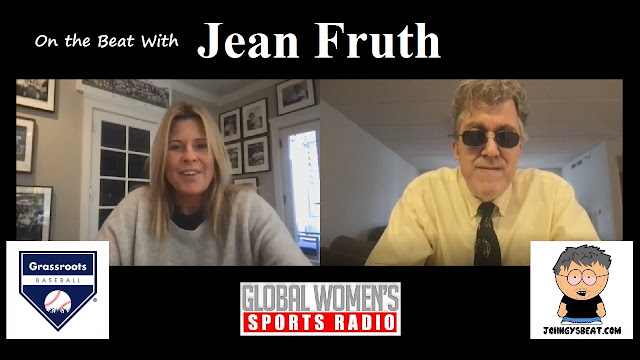