The pride of Green Bay, Wisconsin, Natisha Hiedeman has worked hard to become a solid WNBA player with the Connecticut Sun. A standout at Marquette, TSpoon bounced around a bit in her first season, but found her home with the Sun. Hiedeman earned a Celebrity Jersey Card while wearing a Boston Celtics jersey. The #0 was never worn by a Celtics player, but Robert Parish wore #00. 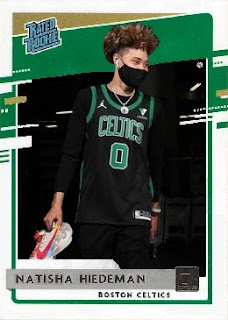 Lacrosse player Michelle Tumolo was raised in New Jersey and starred at Syracuse. Tumolo plays on the U.S. National team, as well as coaching the Army Black Knights lacrosse team at the U.S. Military Academy. Tumolo wore her usual #35 on a throwback Seattle Supersonics jersey to earn her Celebrity Jersey Card. Several Sonics wore #35, including Paul Silas, but my favorite name is Zaid Abdul-Aziz (aka Don Smith). 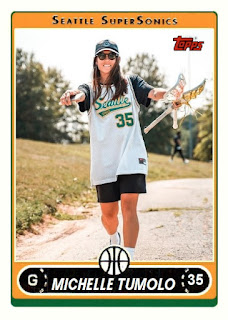