Cards That Never Were is a recurring series in which I create virtual trading cards for players missed in various sets. It is a concept I have borrowed from far too many to list, but I appreciate all of their efforts. More of my creations and many great creations of others can be found in the Custom Baseball Cards Facebook group (and not just baseball cards).
The older brother of hockey Hall of Famer Ken Dryden, Dave Dryden also had an excellent career, although it started a bit by accident. In the 1961-62 season, Dave attended a game as a fan. The goalie for the New York Rangers got injured and Dave was pulled from the stands as the emergency goalie (a practice which still happens on occasion). Dave played 40 minutes, giving up three goals in a loss. That play ended his collegiate eligibility.
Dryden returned to the NHL with the Chicago Blackhawks for the 1965-66 season. He remained in the NHL for three seasons, but spent 1969-70 in the minors, before returning to the NHL with the Buffalo Sabres in the 1970-71 season. After four seasons with the Sabres, he signed with the Chicago Cougars for one season, then joined the Edmonton Oilers, for whom he played five seasons before retiring.
The Dyden brothers made history in 1971 when they became the first (and still only) brothers to face each other in goal in an NHL game. It wasn't even scheduled to happen, but an injury to the starting goalie made it possible. Dave is also designed the modern goalie fiberglass mask.
For his efforts, he received cards from 1965 through '68, '71-'77 and '79. That left 1962, '66, '69, '78 and '80.
Finding a pic for his one game with the Rangers was a real challenge and requred colorization. It's not great, but it's the best possible.
The 1966 card was created by the Compleat Toronto Maple Leafs Hockey Card Compendium. I was searching for a decent picture of Dave with the Hawks and I came across his cool website. He has created a ton of custom cards. I literally got lost for an hour and haven't even scratched the surface.
I found the '69 card through a Google search, but I do not know the creator. If it is your creation or you know who made it, let me know and I will give proper credit.
Since Dave and Edmonton were still in the WHA, there was no card set for that league in '78. The Oilers joined the NHL after, allowing me to create the '80 "career capper" card for Dave. 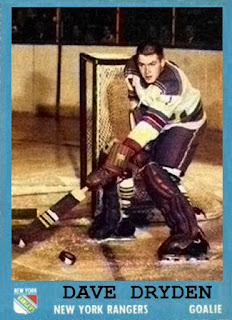 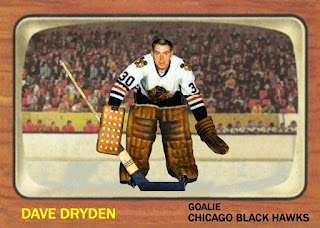 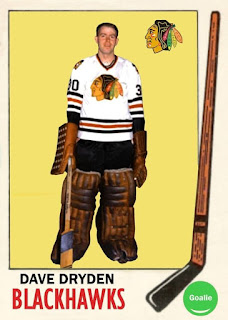 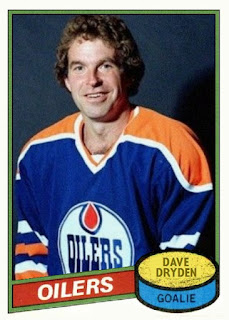