The Squared Circle Expo II is two months away. After a fantastic debut and many months of anticipation, SCX II is set to be even better than the inaugural event.

SCX II is a two day convention running April 15-16 at the Wyndham Indianapolis West. It is a convention for the wrestling fans, run by folks dedicated to making it a fantastic event. Their dedication paid off last year as the SCX was the best convention debut I have attended and SCX II promises to top it.

Last year, Darby Allin was one of the guests I really wanted to meet. The young wrestler was a rising star in All Elite Wrestling. Since then he has gotten even bigger, entering a storyline with the legend Sting.

Allin was just one of dozens of wrestlers at SCX. This year, the list is already amazing and it is still growing.

I got tired just typing all those names. I also got dizzy thinking of the level of stardom there.

This list already covers wrestlers from many decades and several companies. I don't think the SCX promoters are done though. More announcements are expected. Last year's guest lineup was collectively one of the most fan-friendly groups I have seen.

SCX II will be taking over the entirety of the Wyndham Indianapolis West's 35,000 square feet of meeting space, transforming it into a pro wrestling fan's paradise. One of the coolest features is the Grand Ballroom, with its' 10,000 square feet becoming the setting for Saturday night's live wrestling.

In addition to the wrestlers listed, there will be panels, Q&As, photo opportunities, vendors and more, Saturday night features a full wrestling card to close out the event.

Actually, close out is kind of up to interpretation. The convention officially ends with the wrestling matches, but the fun will continue long into the night as everyone hangs out soaking in the fun as much as possible.

For more info, go to SquaredCircleX.com and check back here for my updates. I do not work for SCX, but I will be "On the Beat" reporting on all the fun. Did I mention I cannot wait! 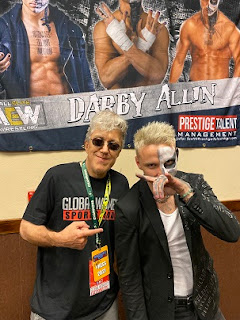