Today I feature my pal Tony and wrestler-dentist Dr. Britt Baker, D.M.D. at the Squared Circle Expo 2022. In fact, I took this picture.

SCX is less than three months away. Running April 7-8 in Indianapolis, it is a fantastic wrestling convention. Last year there were more than 60 wrestling legends and stars, along with many vendors and a full wrestling card on Saturday night. It's not hyperbole when I state SCX is the best wrestling convention. The first year was an amazing debut and it topped that last year. This year looks to be even better.

Last year, I had a lot of fun. Tony and I drove to Indy together and had lots of laughs along the way. It made it so much easier for both of us having a wingman to take pictures. The wrestlers usually have a handler who could take pictures, but sometimes they only take one. With us, we take several quick shots.

Dr. Baker is actually a dentist outside of the ring. This isn't just a wrestling gimmick. I wish I had a dentist who looked like Dr. Baker though. Looks and dentistry aside, she is a promising young wrestler with a bright future. The line to meet her was long and it will only get longer as she continues to excel in the ring.

For more info on SCX, go to SquaredCircleX.com. Also check here for my recurring coverage. 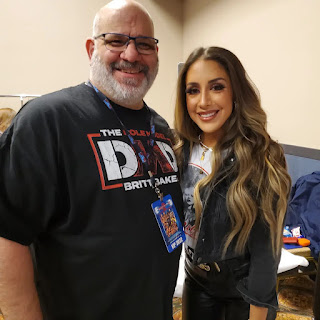