On the Beat With Kayla Wedl

Yesterday, I had the pleasure of being "On the Beat" with Kayla Wedl, new assistant softball coach at the University of Illinois Chicago. I followed Wedl's career when she was a standout player at UIC, but this was my first time interviewing her.

Wedl had an outstanding career on the softball diamond at UIC. During her UIC career, she was named Horizon League Player of the Year twice (2019 and 2021). In 2021, she paced the Horizon League in seven offensive categories. She was also the conference's nominee for the NCAA Woman of the Year award.

Last season, Wedl played professionally for the Athletes Unlimited Softball League. The hometown athlete always had a big cheering section, including me.

It was an AU softball game when Wedl was approached about joining Head Coach Lynn Curylo's coaching staff. On November 1, 2021, UIC announced Wedl as a new assistant coach.

Coach Wedl talked about all of this and more. She discussed coaching her former teammates and coaching with her former coach. She discussed the transition and gave an early season scouting report on the Flames. She also discussed playing for AU and their unique scoring system.

The Flames are off to a rough start, going 2-8 in two west coast tournaments. They have one more tournament, the South Florida Tournament March 4 and 5, before starting Horizon League play. Their Horizon League schedule starts March 11 at Purdue Fort Wayne. The Flames play their first home game March 18 when they host Youngstown State.

I thank Coach Wedl for her time and wish her and the Flames luck this season. I will be at some UIC games this season to see the Flames in action up close.

Our interview can be found at On the Beat With Kayla Wedl. Also, go to UICFlames.com for more info on UIC sports. 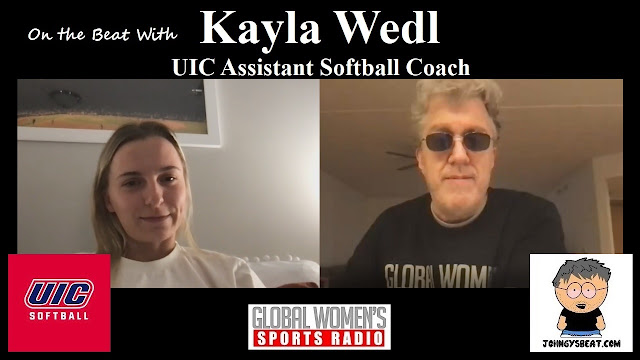