The Travel & Adventure Show series made Chicago its first stop of the year. In its 17th year, with more than 100 previous events, it filled the exhibit hall with travel brands and celebrities, including actor and travel writer Andrew McCarthy.

Perhaps better known for his 40 years of acting and directing, McCarthy has an impressive writing résumé, too. He was an editor-at-large for 12 years with National Geographic Traveler magazine. He has written travel pieces for The New York Times, The Wall Street Journal and several other publications.

Saturday morning’s session with McCarthy started with him explaining how walking the Camino de Santiago trail in Spain changed his view of the world. He began writing little stories about his experiences. After about 10 years, he wrote his first piece for National Geographic Traveler. From there, his passion grew and his writing increased.

For McCarthy, travel is a necessity, not a frivolous thing. He differentiates travel from vacations. Travel should take us out of our comfort zone, while vacations are all about being comfortable.

McCarthy travels to conquer fear. He feels vulnerable as he offers himself to different destinations and people. He sums up his theory as, “Traveling is an act of faith and optimism. Travel obliterates fear.”

In a particularly poignant moment for me, McCarthy played a video of himself walking 42nd Street in New York City. This wasn’t a walk to a particular destination. It was a walk of discovery of the people, places and activities along the route. Just a few months ago, I did that same walk. For me, it was one path from my hotel to the Javits Convention Center. I took different routes each of my four days to do exactly what he did. I used those walks to explore New York. I wanted to experience New York City, and I did just that with each walk.

McCarthy also discussed the benefits of traveling alone. Solo trips force travelers to face and conquer fears. You are more likely to need and ask for help when alone than with others. In groups, even of two, people tend to figure out things on their own. Both type of travels have upsides, and a mix of both is optimal.

His passion was palpable. Immediately when I got home, I ordered The Longest Way Home, his first book. It’s a memoir of self-discovery played out while traveling to Mt. Kilimanjaro, Costa Rica and other fascinating locations. Needing to understand his relationship with his fiancée, McCarthy hit the road for self-discovery. 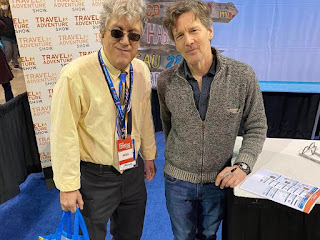 Andrew McCarthy and me in Rosemont, IL-February 2022.