On the Beat With Jessica Bracamonte

Yesterday, I had the pleasure of interviewing Jessica Bracamonte, Assistant Softball Coach at Duke University. One of the first Chicago Bandits I ever interviewed, Jessica has carved out a solid coaching career which I have followed and I am happy to get an update interview.

A native of California, Jessica was a star outfielder at Michigan State University. A couple injuries derailed her attempts to play professionally, but Jessica overcame the setbacks to eventually join the National Pro Fastpitch Chicago Bandits. Her journey to the Bandits is a great story and Jessica shares it in the interview.

Jessica started her coaching career as a student assistant at MSU. After a couple other coaching stints, Jessica was officially named an assistant at Duke in July 2019. Coach Jessica focuses on the outfield, slappers and assisting with overall offensive strategies.

Coach Jessica talked about all of this, including giving me a quick scouting report on the Blue Devils. It truly was fun for me to catch up with her, but more importantly, to see her happy and succeeding. I'm sure Bandit Nation would agree she is and will always be part of Bandit Nation.

The Blue Devils are off to a hot 13-3 start. They are coming off a 4-1 weekend in the Duke Invitational Tournament, including a split of two games with No. 19 Michigan. They are hitting .360 with 32 home runs, while holding opponents to a .203 average with three homers. Their pitching staff has a 2.00 ERA, while opponents have a 7.79 ERA. Those are impressive numbers.

I thank Coach Jessica for her time and consideration during the busy season. I wish her and Duke a lot of luck. We'll be following the Blue Devils and will check back with Coach Jessica later in the season.

Our interview can be found at On the Beat With Jessica Bracamonte. Go to GoDuke.com for more info on Coach Jessica and the Duke softball squad. 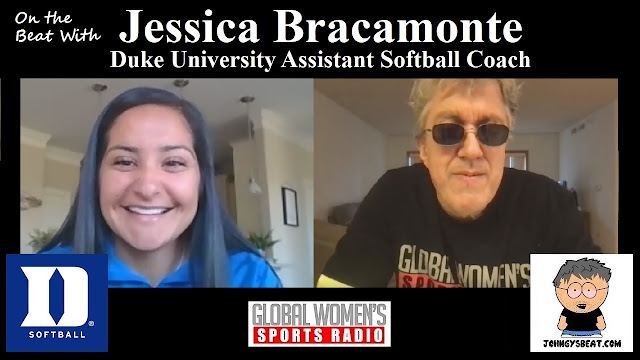