Last Sunday, I had the pleasure of attending my first event at 2econd Wrestling. My buddy Tony and I planned on going, but then I was fortunate enough to win two tickets from a contest on 2econd Wrestling's Facebook page.

We met there early as usual, but the folks at 2econd Wrestling were already setup ready to go once the official time started. This was a good sign, as wrestling shows are notoriously late. The staff was extremely nice, which was another bonus.

Prior to the show, I ran into Mike Pankow, long time friend and creator of Windy City Slam, a fantastic wrestling site. As we caught up, other familiar faces appeared. It was great seeing BD Smooth and Merle Ramsey, who I knew well from their time as the Slobberknockers at Resistance Pro. Then I saw Val Capone, former roller derby star, who is now killing it as a wrestling commentator. Next I saw Matt Knicks, another friend from our days at RPro. I don't see these folks often, but it is always wonderful when we can catch up.

As time passed, a few wrestlers trickled out to tables for meet-and-greets. We immediately went to Blair Onyx, who had a remote control spider with her, a nod to her unique gimmick. I had recently seen Onyx wrestle for the first time and I immediately loved her gimmick and move set.

By then. the show was about to start. We settled in our seats and I realized the crowd was actually pretty large by now. There were lots of kids, which made for a fun, rowdy atmosphere.

I admit, Starkz winning both matches totally surprised me. The best part was her wins weren't shock value wins. She earned them. While I am interested to see where she goes from here, I was really pleased with how this night played out.

Starkz is a real talent. Her wins were totally believable. She is a credible champ. It was a bit of a risky move having a woman win the first title, but Starkz makes it work.

After the show, we met several of the other wrestlers, including Starkz. Tony and I both complimented Starkz on her matches and overall skill set.

Among the other wrestlers, I talked a bit to Darius Latrell, who I had remembered from his time as a basketball player at UIC. This guy is huge and has a bright future. He's early in his career, but the potential is there.

I will definitely return to 2econd Wrestling for future shows. It was a great experience. The show was punctual and ran smooth. Everyone there was pleasant. The wrestlers (even the heels) were fan-friendly. I loved the Sunday afternoon time slot. There were really no negatives. 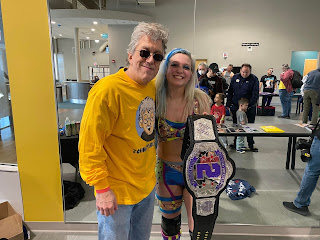