Ryan Barkan is the Founder and CEO at Pro Wrestling Tees and One Hour Tees. He is the man responsible for all of the Johngy's Beat shorts.

I have been getting my shirts printed at One Hour Tees for many years. Back when I first went there, Ashley Caliendo helped with fonts and general design after I showed her the Johngy logo. After that, they printed my shirts for years.

In 2013, Barkan launched Pro Wrestling Tees, a shop for wrestlers' shirts. Last year, I finally decided to apply for a store within PWT and was approved. I currently have 4 shirts available at PWT.

At C2E2 2021, I ran into Ryan (not surprisingly) around the All Elite Wrestling booth. I thanked him for allowing me to set up shop within pWT. I also said how cool it was for my shorts to be in the same store as CM Punk, Arn Anderson, Ruby Soho and the other wrstlers appearing at C2E2.

I currently have four tshirts available for purchase at PWT. The Black Edition is permanent. The others rotate on occasion. The Cantarella Ink version (designed by Ali Cantaeella of Cantarella Ink) is the first new version of the logo since I started.
To order any shirt, go to ProWrestlingTees.com. Also, be on the lookout for occasional sales. 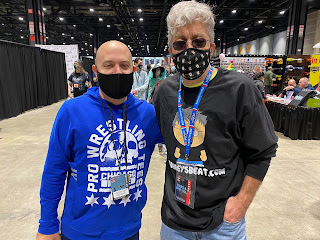