Friend Encounters is a weekly series featuring friends who have met celebrities.
When the pandemic was lessening, my bud Tony Feddeler and I decided to go to more independent wrestling shows to see some new talent. One of the most talented young wrestlers is Billie Starkz.
Still in her teens, Billie has been preparing for a pro wrestling life for several years. She started in high school, which caused some funny situations. Billie talked about that and more during the interview Tommy Else and I did with her for Global Women's Sports Radio.
When Tony and I saw Billie would be wrestling at 2econd Wrestling's show north of Chicago, we immediately knew we needed to see her and the new-ish company. Neither disappointed!
The crowd was hot all afternoon (yes, a Sunday afternoon show!) and all of the wrestlers were on the top of their game, especially Billie, who wrestled twice. Both matches were against men, with the last being the final match for the inaugural 2econd Wrestling championship.
After the show, Tony and I beelined to Billie's table to meet the champ (we may or may not have pushed some kids out of the way). Billie was exuberant with her newly-won title. She was also as nice as could be.
Writer friend John Cosper has been singing the praises of Billie for a while and he was right. Billie will be on the big stage very soon. I'm glad we got to meet her now.
Follow Billie on Instagram to get all of her updates. Check out the interview with Billie at On the Beat with Billie Starkz. 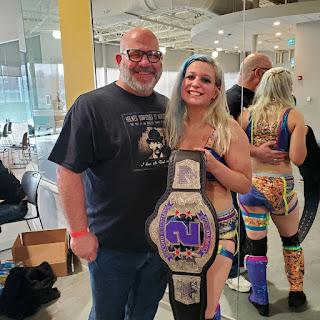