Celebrity Jersey Cards is a weekly series in which I create virtual trading cards for celebrities wearing sports jerseys. Today, I continue my season-long march alphabetically through all MLB teams.

It's not the greatest picture, yet it is a great picture of musician Jason Mraz and I am not just saying that because Billy Joel is prominent. A native of Virginia, Mraz is a two-time Grammy award winner, among his other accolades. A supporter of the LGBTQ+ community, Mraz has openly discussed his struggle with his sexuality and song-writing. He earned his Celebrity Jersey Card while performing with the Piano Man, presumably in San Diego. 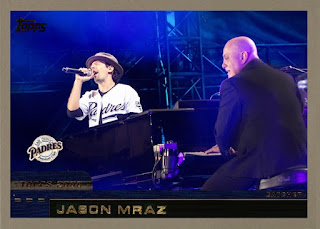 Jessie James was born in Italy, but found success in America first as a singer. She has since added acting and other entertainment roles to her resume. She also added Decker as her last name when she married former NFL receiver Eric Decker. James got her Celebrity Jersey Card after singing the National Anthem for the Padres. 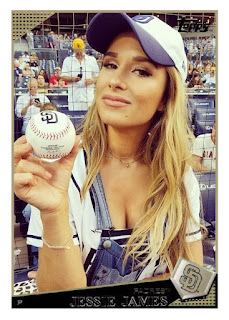