After a highly successful debut last year, the Squared Circle Expo II is returning April 15-16 in Indianapolis, IN. One of the guest I look forward to seeing again is Chelsea Green.

After a few misses at other events, I finally met Impact Wrestling star Chelsea Green at C2E2 last year. Chelsea was a fantastic guest at C2E2 and is an excellent addition to the SCX II guest lineup. I wrote more about Chelsea at Chelsea Green Added to Squared Circle Expo II on Global Women's Sports Radio.

Appearing at Michael Kingston's Headlocked Comic booth at C2E2, Chelsea was as pleasant as could be. She made each fan's moment a special one. I visited the booth several times to talk to Michael and Chelsea even noticed I had changed shirts during one day's event. After meeting hundreds of fans, I was surprised she would even remember me, let alone the shirt I was wearing. It became a bit fo a joke all weekend

Last year, SCX surpassed all expectations, especially for a debut event. It was two solid days of meet-and-greets, panels, Q&As, vendors and more, ending with a solid night of wrestling. The promoters did a great job making sure things ran smoothly right from the first announcement. On one hand, they set a high bar to match this year. On the other hand, I have total confidence they will reach and pass that bar.

Go to the Squared Circle Expo Facebook page for more info. Also, check C2E2.com for info on C2E2 2022 December 10-12. As always, I'll be "On the Beat" at both events. Check back here for my recurring coverage. 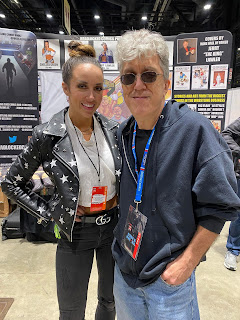