On the Beat With Billie Starkz

Young wrestling champ Billie Starkz joined Tommy Else and me on The Johngy OR Else podcast. Starkz is currently the holder of two championship belts, as reigning champ at 2econd Wrestling and Girl Fight Wrestling,

Starkz, 17, has wrestling experience beyond her years. Falling in love with wrestling after watching it an an early age, Starkz knew she wanted to be a professional wrestler. With that in mind, she decided to start training then, instead of waiting until after college. Those early years of training paid off, as despite her youth, she is considered to be one of the top wrestling prospects.

One of Starkz's greatest strengths is her versatility. She is equally comfortable wrestling men and women. She is equally able to wrestle a highly technical match, while also being capable of brawling with anyone. She has a fantastic moveset and a tremendous ability to connect with the crowd.

At 2econd Wrestling Flood Zone a few weeks ago, Starkz beat two men in the final rounds of a tournament to become their first ever champ. Challengers are already lining up and Starkz is ready to face anyone. I was at Flood Zone, watching up close as Starkz won the matches and had the crowd fiercely behind her. The energy was incredible.

On the other hand, Starkz is also excited about defending her Girl Fight Wrestling championship. On April 12 at Nothing Can Stop Us, Starkz can expect a smashmouth battle as Kimber Lee challenges her for the GFW title.

We talked to Starkz about all of this, including her hobbies, wrestling overseas, her first wrestling role models and more. She told a great story about explaining her career to high school teachers and friends.

Like so many others, including our friends Mad Man Pondo and author John Cosper, Tommy and I are very impressed with Starkz. She has everything i takes to become a big star in pro wrestling. She has an awesome start and looks to have a bright future. We'll certainly be following her.

Our interview can be found at On the Beat With Billie Starkz. Thank you to Starkz for her time and consideration. Check out 2econdWrestling.com and GirlFightWrestling.com for more info and look for Starkz everywhere. 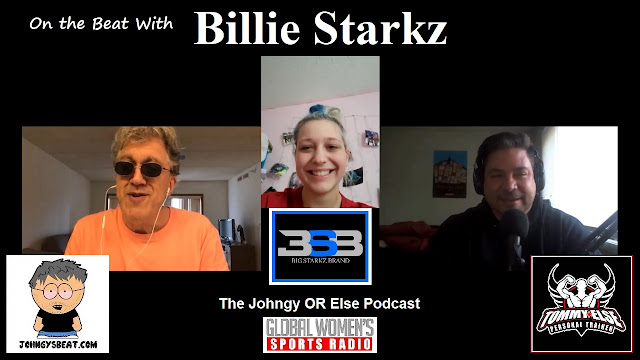