Rachael Ellering is a second generation wrestling star. Her father Paul was known mostly as a manager of the legendary Road Warriors, but also wrestled

Trained at the Storm Wrestling Academy, Rachael made her debut in 2015. Since then, she wrestled for Shine, Impact Wrestling, the WWE and other smaller companies, including Resistance Pro Wrestling.

At RPro, when Crazy Mary Dobson left for the WWE (as Sarah Logan), there was a tournament to crown a new women's champion. Ellering won the tourney and therefore the RPro Women's Championship on November 5, 2016. Almost a year later, on September 23, Ellering lost the belt to Holidead in a four-way match that also included Fujita and Kylie Rae.

A feud between Ellering and Holidead should have been a great one, but it never happened. At the time, RPro was only running sporadic shows, which caused much turnover in the roster.

As an RPro commentator, I got to see Ellering up close during her short time at RPro. Although she was young and somewhat inexperienced, Ellering was advanced beyond her years. She was already solid in the ring and the fans loved her. She would have been a great successor to Crazy Mary.

Suicides, depression  and mental issues in general have plagued pro wrestling or many years. Dropkick Depression is an online depression forum and information center created by pro wrestler Terra Calaway. It's a fantastic organization and GWSR fully supports it.

For more info, go to DropkickDepression.com. Also, go to RachaelEllering.BigCartel.com for cool products from Ellering. 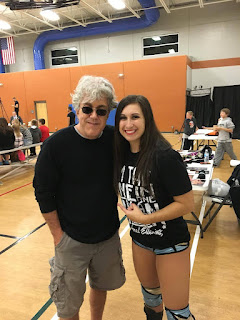 Rachael Ellering and me in Summit, IL-November 2016.
Posted by Johngy at 6:00 AM